I grew up on a farm east of Bismarck, ND.  We farmed all small grain crops (wheat, oats, barley, rye) and raised Texas Longhorns.  After high school I got my physics degree from Augustana College in Sioux Falls, SD and my BS in mechanical engineering from South Dakota State University in Brookings, SD.  I met my wife, Robin, at Augustana College, we married in 1988 and moved to West Des Moines, IA in 1989 when I took my first job out of college with Shive-Hattery.  I will be celebrating 25 years with Shive-Hattery on June 12th of this year.

My mentors were too many to name, however there were three that made a huge impact on my career, not just because they were great teachers, but because they were leaders and their actions spoke louder than words.  Mentors like Curt Klaassen, Jim Lee, and Russ Allen saw something in me and invested their time and talent trying to develop something out of very little.  There were very late nights, early mornings and many weekends dedicated to teaching me some of that ‘consulting stuff’ that they knew and I needed to learn.  I’m grateful for their patience.  One area that my mentors excelled at was to preach about ASHRAE and getting involved.

Ed Truslow called me to get me involved on one of his committees.  It just got better after that.  I served on several committees, but my favorite was TEGA (technology, energy, and government activities) and when I was asked to serve as an officer, I was extremely enthusiastic and thankful for the opportunity.  There was no shortage of leadership during those years; we had the guidance of Jeff Hammer and I remember his reflections on the not too distant past when our chapter checkbook was empty.  We heeded Jeff’s warning and there was a considerable amount of effort in fundraising by so many people in the club.  I have to laugh though, because Dan Zaug will probably tell you that I was the most frugal (almost cheap) treasurer he’s ever known.

ASHRAE is more than just a fantastic arena for technical growth, if you approach it right, you will make lifelong friends that will bridge the gaps of competition between firms.  One of the greatest treasures of ASHRAE is the friendships that we develop when we serve together.

Ralph Schilling introduced me to jazz at the ASHRAE Chicago Winter Meeting in the 90’s.  He took Mike Petersen and myself to the bars, made us stay out way too late, and forced us to have a great time.  The trip was made possible by the generosity of Hart Hammer and the bus trip.  It was a great time to meet new people.

The CRC in LaCrosse WI was a wonderful CRC.  We visited a neighborhood establishment and got the whole place to raise their glasses and toast to nothing more than “Ayyeeeee”.  Dennis Stanke was a fantastic host from the LaCrosse chapter. 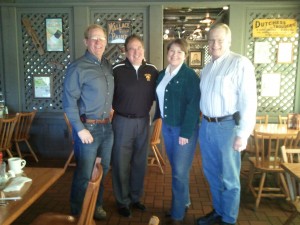